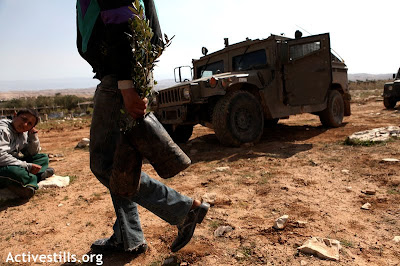 A Palestinian walks next to an Israeli jeep with an olive tree on the lands of Jubbet ahd Dhib Theeb as part of a solidarity action to reclaim the lands in danger of confiscation by the settlers, on 01.02.1010. Around 20 Palestinians came to help farmers in a isolated area next to the settlement of Noqedim. 50 olive trees were planned to be planted but ithe [sic] solidarity action was stopped by settlers and Israeli soldiers. As soon as they started to plant, a car of armed settlers came with dogs and threatened the group, declaring that "this is our land". The Israeli army arrived and asked everybody to leave the area within 5 minutes, claiming that the owner should first go to the Civil administration to prove ownership. Journalists were also prevented to document. Palestinians living in this area are very isolated and subjected to constant harassment by the settlers. Photo by: Anne Paq/Activestills.org.

Further to the story below, there is a woman who is seven months pregnant on that boat. She was four months when the boat first entered Indonesian waters. Apparently the people on the boat are all highly skilled professionals, especially in the medical fields. Lord knows,Australia has a shortage of such individuals. A very good radio interview with one of the advocates can be heard here. It is the first interview of the programme.
Posted by lizardrinking at Tuesday, February 02, 2010