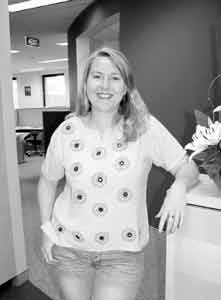 Donna Mulhearn
I really admire people who stick to the humanitarian beliefs of their religions, such as non-violence and love for their fellow people, enough to go out and try and defend them; both the beliefs and the people.

Naturally enough, I think humanism does not have to have a religious base, and there are enough agnostics and atheists out there who also follow the feelings of their general compassion.

Yet, I really admire those who go to Iraq as human shields, to Gaza as witnesses. There are Muslims, Christians and Jewish groups who are opposing injustice. Some of these might have the hope of converting souls, but more are there because they feel they should abide by the scriptures of their religions which promote peace, love, compassion and are against violence. I think the basis of all religions is actually love. I especially admire them in the face of religious zealotry, which to me, seems to be religion gone wrong or way off the track. If you see Buddha, kill him. Christ is within us. You are the Buddha. Saint Thomas, from what I know, preached belief from inside out rather than the other way around. From the surface understanding of Islam that I have, this seems to have a core principle, even if it might not be adhered to. Know thy own self and act accordingly within the confines of the society you belong to, the world you belong to, seems to me to be the message of religions that somehow gets aborted along the way. I do tend to think that people are more generous than dangerous and mean. I do believe in evolution, and though animals kill one another for survival, I see them live together in harmony when survival is not at stake. I do not think overriding human characteristics are to kill, steal, rape and deprive.

As from the evidence of the existence of Red Crescent and other groups, there are obviously Islamic groups which are also humanitarian in nature, Buddhist, Hindu and so on. Also, groups which are not linked to any religion. Medicin sans Frontieres, Physicians with Borders, Amnesty International to name a few.

Anyway, if you go to Indy-media on this link you can listen to Christian activist, Donna Mulhearn, who has gone to the continuing humanitarian disaster that is Gaza, who has been a human shield in Iraq, who has protested Pine Gap in Australia. She used to work for the Carr government in NSW. She was a political animal for the Australian Labour part at the time. The show is only half an hour, and Mulhearn appears probably in the last five minutes. The whole show is worth listening to, though.

Donna Mulhearn is at the Perth Writers' Festival. Good luck to you finding the exact dates! I am crap at navigating sites, but I have to say, a lot of them are not user friendly.

Through Autralian Eyes has this to add about human rights workers. Many of whom work for Christian groups such as Oxfam.
Posted by lizardrinking at Monday, February 22, 2010