I have been neglecting this topic for a while, but it is always there. There are many bloggers and people far more committed than I, and maybe, one day, their efforts will amount to something. In the meantime, there is this picture from the Australian blog, Through Australian Eyes. and the accompanying text

Shehada Street, Hebron, once a thriving shopping destination, is now a place of fear. Because of its proximity to the ultra-orthodox Jewish settler colonies in Tel Rumeida it is a place to be avoided by the indigenous population, especially women and children. Physical violence and intimidation by Zionist thugs, with the passive encouragement of Israeli soldiers and police, is an everyday occurrence, part of a strategy to force Palestinians to abandon their homes. Read more.

That's wine being thrown in that picture. In the meantime, from the same blog (the writer is a strong Christian, I think, though also anarchist, might cancel each other out?) our slimy, smarmy prime minister has been meeting another man without a conscience: 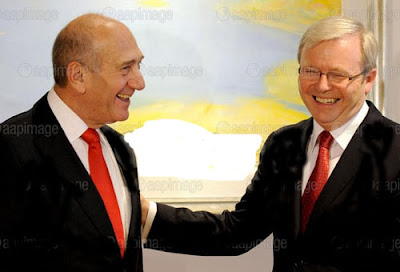 Ehud Olmert and Kevin Rudd.
I guess the day will come when they'll both have to return their souls to the devil for whatever deal they made with him. Or, to be not so poetic, wake up with some form of compassion. Maybe some people just aren't born with it. This article from Australians for Palestine deals with Olmert's visit, in addition to the article in Through Australian Eyes. This link on the Australians for Palestine homepage, Action against Israeli War Criminals, provides you with address and media outlets where you can voice your dissent if you wish. In addition, various protests have been organised.
Posted by lizardrinking at Monday, November 30, 2009 No comments:

Ben White, a Christian (I think), British journalist, who often writes for The Guardian, wrote the following on the 29th November:

Just to give an impression of the dangerous slope we are on, here are a few proposals and declarations made by cabinet ministers in the few months the Netanyahu government has been in power:

● The minister of transportation, Israel Katz (Likud), is promoting an initiative according to which all Arab names on road signs will be replaced with Jewish ones.

● The minister for Tourism, Stas Misezhnikov (Israel Beytenu), demanded that the pope cancel meeting with the Arab mayor of Sakhnin on his visit to Israel.

● The Housing Minister Ariel Atias (Shas) called to stop Arab “spreading” in Wadi Ara, a region densely populated by Israeli-Arabs. he is currently pushing a plan for a city for orthodox Jews in the area.

● The Education Minister Gidon Saar (Likud) ordered that Arabs won’t be allowed to teach the term Nakba, referring to their national disaster of 1948.

● The minister of the Police, Yitzhak Aharonowitz, has told an undercover agent he “looks dirty like a real Arabush” (a Hebrew slang word that carries a cultural meaning very similar, or even worse, than “nigger” in the US).

● The Finance Minister, Yuval Shtainitz, declared that one of Israel’s problems is that Arab women “don’t want to work”.

● and finally, Israel’s Foreign Minister, Avigdor Liberman – a man who disgraces not only the state, but the entire Jewish people – promotes plans for striping [sic] Palestinians of their Israeli citizenship or from the rights is gives them.

His blog is always worth a read. The entries are short, succinct and to the point, and will tell you the everyday occurrences in Israel and Palestine that the New York Times will not touch.
Posted by lizardrinking at Monday, November 30, 2009 No comments:

Labels: human rights abuses, Palestine, why do we support this?, why? 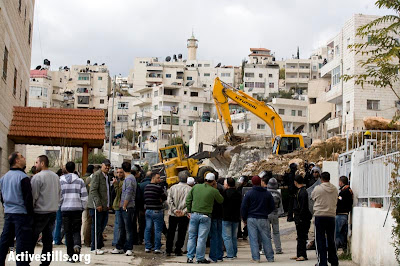 Bystanders during a house demolition. Escorted by police and army contractors of the municipality of Jerusalem demolished a home in Isawia. Photo by Meged Gozani/Activestills.org

The pictures we rarely get to see. Really lovely.
Posted by lizardrinking at Tuesday, November 17, 2009 No comments:

on the 20th anniversary of the fall of the Berlin wall 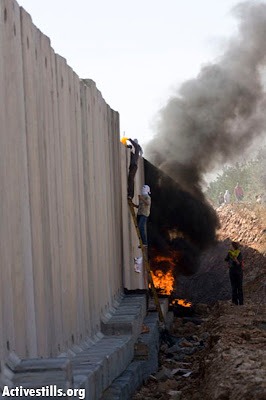 Palestinians, Israeli and international protesters toppeled one segment of the concrete wall, during a demonstration against the barrier in the West Bank village of Nilin, near Ramallah, Friday, Nov. 6, 2009.
The protest in Nilin was held to mark the 20th anniversary to the fall of the Berlin wall, which has been declared an international day of action against Israel's barrier.
The 300 demonstrators managed to topple a part of the eight meters tall concrete wall that cuts through the village's land. The concrete wall in Ni'ilin - five to eight meters (15 to 25 feet) in hight – has only recently been laid on the path of the wall cutting through Ni'ilin's lands, in addition to the already existing electronic barrier and razor-wire.

Posted by lizardrinking at Saturday, November 07, 2009 No comments: 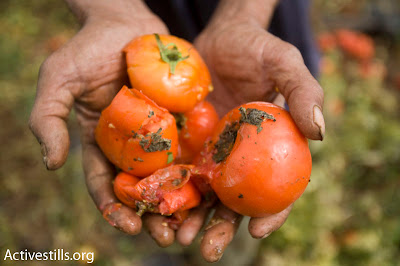 Atta Jaber shows tomatoes from his field after Israeli army contractors destroyed it and removed the irrigation system near the Jewish settlement of Kiryat Arba, near Hebron, on October 29, 2009.

The Israeli army claims the field poses a security threat because it is too close to the settlement.
Photo by: Oren Ziv/ Activestills.org

Posted by lizardrinking at Tuesday, November 03, 2009 No comments: