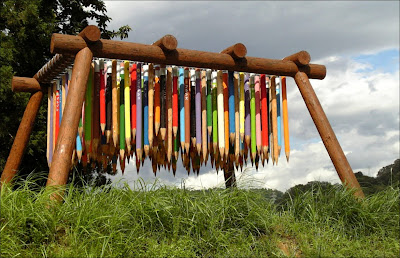 Reverse City, Pascal Marthine Tayou
***Update, 6 October. The Echigo Tsumari Art Triennial site has the Autumn programme up in English now. However, I think the finish times for the tour are incorrect on some pages, though not the one I linked to - so you should double-check if you are taking them (it finishes at about 16.15), and it does not have any details of the special train from Niigata or the service bus from Nagaoka (links are in this post). Still, it does have lists of which artworks are open and a lot of other information.***

Okay, the Autumn launch of the Echigo Tsumari Art Triennial for 2009 begins this Saturday the 3rd of October. I'm not seeing much around in English for it, so for those who are curious, I will post what I know. I can't really read too much Japanese, but I have been in touch with the wonderful people who run the Art triennial, some of who have a pretty good working knowledge of English, and so I will put up the Japanese links, and repeat what I was told as accurately as possible, and if you can read Japanese, all the better for you. 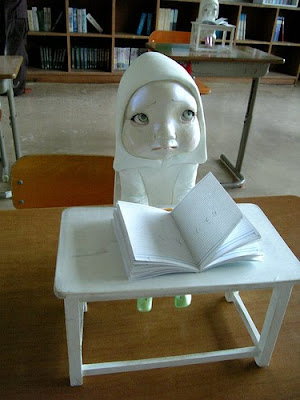 Culture Bound Syndrome, Ryoichi Yamazaki
The Autumn part of the festival is running from October 3 to November 23rd. Particularly later on, this should be a beautiful time to visit the Echigo area with all the leaves in the mountains changing colour. Rather than tours running through the week as there were during summer, the tours are limited to Saturday and Sunday. One tour on Saturday and one tour on Sunday. Here is a link to the Japanese site which details that.

The departure and arrival times are as follows:

The Saturday course includes Ubusuna House, Antony Gormley and Potemkin among other artworks (that's about all I can read). This website details the artworks, and this article from the Guardian sums up the triennial very well. 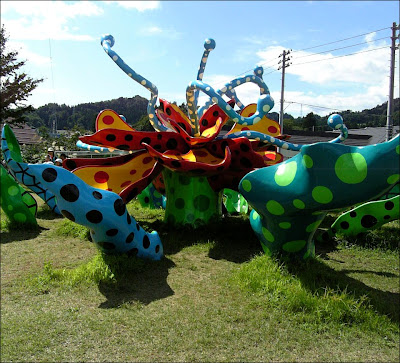 The tours are really pretty good value considering how winding the roads are around the Tokamachi and Tsunan areas and considering I would probably spend more time lost than looking at art. Additionally, the artworks are spread through 760km of countryside, which is quite some countryside. The tours are all in Japanese, but the art speaks for itself. The cost is 5800￥ though you still need to buy your passport if you don't have one (was ￥3500, but the price might have gone down, but I might be wrong on that). The company is called Satoyama Tours, and their number is
0120－865－615. All of the guides are volunteers, quite a lot are local, and they all love art. 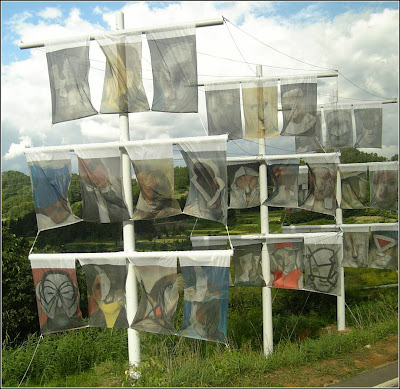 The Visitors, Stasys and Kolodziejski /Witaszewski (A+D)
If you are coming from Niigata there is a special train running on the weekend to Tokamachi and back. I can't tell you how fantastic it is to know that. I don't know if it was running in the summer, but I spent a very long time in Tokamachi waiting for the local train to take me to Nagaoka and then to Niigata. Of course there is always the shinkansen or the limited express, but the cost adds up and you still have to get to a station which the faster trains frequent. So, here is the link for the trains, and I will paste the times below as well. The train times on that pdf are the ones in blue.

That pdf also includes an art bus, which I think is free, which leaves from Nagaoka at 7am and gets to Tokamachi (from where the tours depart) at 10. That is a very long three hour drive, but it goes through many of the local areas, so if you wanted to get a feel for the place, you could. If the leaves are already changing, it could be very beautiful. It leaves Tokamachi at 16.20 and gets to Nagaoka at 19.20. If you are going to take the bus, it picks up at the East exit, just opposite Hotel New Otani.

Train timetable from Niigata to Tokamachi and return
Not a terribly clear timetable, is it? Well, if you click on it it will enlarge and is clear, or refer to the original pdf above. The train leaves Niigata at 7.30 and arrives in Tokamachi at 9.52, and the return train leaves Tokamachi at 16.41 and arrives in Niigata at 19.04. Considering my last trip, before I used the courtesy bus provided to Nagaoka (which only took an hour that time - no meandering), had me in Nagaoka at 20.05 and home by about 22.30 after catching a 6.15 train that morning, you can't (or maybe can) imagine how happy I am that this train has been provided.

According to Hyperdia the trains are local, which is good news for price, because they are actually operating as limited express trains. The Echigo staff told me that the ticket price was ￥2180 one way, but Hyperdia says it is ￥2380 (I think this is the price for a reserved seat). However, I got myself an Echigo Two Day Pass which can be used on local trains, and apparently limited express rapid express, as well, as far as Tokamachi. It only costs ￥2500 and covers from Shibata (and a little beyond, but I can't read the kanji) to Tokamachi and again, a little beyond, so it would be well-worth the purchase for anyone leaving from the Niigata city area. I think it has to be purchased before the weekend, though, and you need to specify the dates you will be using it. But, especially if you wanted to explore the area on a non-tour day, it is get on the train get off within the area, you can save quite a bit of money. 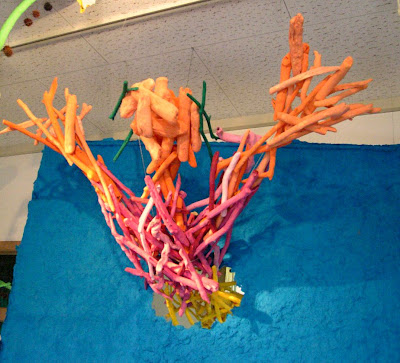 Hachi and Seizo Tashima Museum of Picture Book Art, Seizo Tashima
I can only find Japanese information on the two day pass (there is also an Echigo one day pass for ￥1800, but it doesn't extend as far as Tokamachi). But if you print this off your travel agent will know what you are talking about and if you have a friend who can read it, that will help, too. Of course, you might be able to read it, or like me, pick up bits here and there.

Also some information about shuttle buses available in the area during the triennial, but I am not sure if this information includes the Autumn part of the festival. 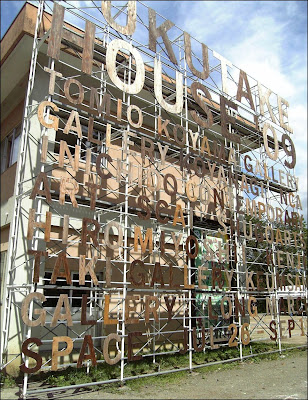 Fukutake House, 2009
Lastly, if you have the time, the staff are very friendly and are willing to make tour bookings for you and to provide information for you if you email them. The email contact is on all of those links, I think, but just to save you some clicking time: info@tsumari-artfield.com. Or: 025-595-6688 (10:00~17:00)There is generally an English speaker on staff.
Posted by lizardrinking at Friday, October 02, 2009 2 comments: