Israel is out of control

This isn't the first time they have done this. Mossad agents are procuring foreign passports and assassinating people. The full news article is below under the heading, UK summons Israeli envoy in passport row. In the 90s Mossad agents tried to gain NZ passports using the identity of a tetraplegic man. That news article is fascinating, as is the one from the Sydney Morning Herald linked to below. NZ suspended diplomatic relations with them for a time, but Israel and the U.S. and Australia, and the world politics are so entwined that the diplomatic sanctions did not remain for long (resumed in 2005).

Australian journalist, Paul McGeough tells of the assassination attempt on Hamas leader, Khalid Mishal's,life in Kill Khalid. A Mossad agent, in Jordan, sprayed poison in his ear. Luckily the then king of Jordan was sympathetic towards Khalid and was able to get an antidote from his ally, Israel.

The cue for Kill Khalid is the attempted assassination of the Hamas leader Khalid Mishal in September 1997 by five Israeli agents posing as Canadian tourists. No great drama in that - Israel has been killing, or trying to kill, assorted Palestinian leaders for decades. (My emphasis).

That is a surprisingly honest review by the Sydney Morning Herald. Entertaining, fascinating and sickening, too.

Really, if we, and by we, I mean my government and its strongest allies, just didn't pretend this was all Okay, it might, it just might sit a little better with me. Why condemn one country for wrongdoing while blatantly supporting another? Government is dirty. Not a doubt. But I feel upset when the people who represent me do so with such smarmy hypocrisy. Way of the world, though.

People wondered how the Holocaust could happen. It really isn't that hard to see why. Not because of any religious reasons, but because those in power do not actually care if injustice occurs unless it is in their own backyards, and even then, I am sure there are any number of politicians who would not mind seeing laws put in place to protect civil rights disassembled, in the way that a lot already have been over the last ten years.

The article below is from Ninemsn and is in full as they pull their archives down, but I will provide a link.The picture is from this Times Online Slide show . The picture shows the suspects involved in the assassination. All were travelling on false passports. As was the Hamas man assassinated. 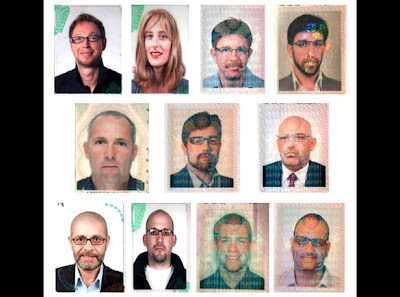 Britain has invited Israel's ambassador to the Foreign Office to discuss the use of fake British passports by suspected killers of a top Hamas figure in Dubai, a spokesman says.

"Given the links to Israel of a number of the British nationals affected, there will be a meeting between the FCO Permanent Under Secretary and the Israeli ambassador tomorrow," said the spokesman on Wednesday.

Speculation about who was behind the killing of Mahmud al-Mabhuh last month has centred on Israel's Mossad intelligence services, which have used agents with fake foreign passports for such operations in the past.

Dubai's police chief this week released the photos and names of the 11 European passport holders - six from Britain, three from Ireland, one from Germany and one from France - alleged to have been members of the hit squad.

"The defrauding of British passports is a very serious issue. The government will continue to take all the action that is necessary to protect British nationals from identity fraud," said the British government spokesman.

He added that, as well as inviting the Israeli ambassador to discuss the issue, Britain is providing support to its nationals involved, thought to be mostly dual nationals living in Israel.

"The British embassy in Tel Aviv is contacting the affected British Nationals, and stands ready to provide them with the support that they need," he said.

In addition "as the (British) prime minister has said, we need to ensure a full investigation is carried out into the fraudulent use of these passports," he added.

Britain's Serious Organised Crime Agency "will lead this investigation, in close co-operation with the Emirati authorities," he said.

Earlier, British Prime Minister Gordon Brown pledged a "full investigation" into how fake British passports were linked to the killers of a Hamas chief, amid calls for Israel to explain its role.

"We are looking at this at this very moment," he told London's LBC radio on Wednesday, a day after Britain said it believed six British passports held by members of an 11-member hit team which killed Mahmud al-Mabhuh were fraudulent.

"We have got to carry out a full investigation into this. The British passport is an important document that has got to be held with care," he told London's LBC Radio.

Mossad is facing questions over the killing of Mabhuh, a founder of Hamas's armed wing, as at least seven Israelis of dual nationality said their identities were stolen by the assassins.

Dubai's police chief this week released the photos and names of the 11 European passport holders - six from Britain, three from Ireland, one from Germany and one from France - alleged to have been members of the hit squad.

Menzies Campbell, a member of the House of Commons foreign affairs committee, said answers were needed over "speculation" about the involvement of Israel's Mossad secret service in the killing in Dubai last month.

"If the Israeli government was party to behaviour of this kind, it would be a serious violation of trust between nations," said Campbell, a former leader of Britain's third biggest party, the Liberal Democrats.

"If legitimate British passport holders were put at risk it would be a disgrace...

"Given the current speculation, the Israeli government has some explaining to do and the ambassador should be summoned to the Foreign Office to do so in double-quick time."

"These allegations against the Israeli government need to be answered... I have no evidence one way or another. I have read all the allegations and the denials. It is an easy allegation to make," he said.

"This is not something that can just be swept under the carpet because of the bad feeling it is going to create in the Arab world.

"You cannot conduct foreign policy at this extremely sensitive time by this sort of illegal behaviour," he added.

The last line resonates: "You cannot conduct foreign policy at this extremely sensitive time by this sort of illegal behaviour." In less sensitive times it's Okay? And of course they can. They did it before, not once, not twice, countless times, they'll do it again, because there will be no sanctions or punishment ever levelled against Israel as they are levelled against the countries, states and territories which are supposedly, relentlessly, curtailing and impeding its every activity.

If that were the case, then this obviously wouldn't be happening, right? Israel can do whatever they want. They know it, and the world knows it, and why? Mainly because they receive a heap of foreign aid, and have great influence in the media and government of the United States. Other countries are allies of the United States, and are as culpable, even if their foreign aid might not reach the staggering proportions that the States does. Even so, Europe, especially the Scandinavian countries, seem to have policies in place which do not openly commend every action of Israel. It would be nice if there were a bit more balance in the media. Or something in the media.

The British court was pressured into not prosecuting Tzipi Livni when she came to the U.K. Israel was up in arms. The court wanted to try her as a war criminal. The foreign ministry put pressure on the court to withdraw the action. Why should Israel listen to any protests the British government has now? It, as well as most of the other western governments, is basically wrapped around its finger. Long live democracy.

This article from Times Online, Britons had passport details stolen by ‘Mossad death squad’ is far more comprehensive than the above.

Posted by lizardrinking at Thursday, February 18, 2010