these are human beings, they are not live cattle 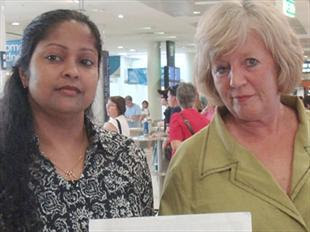 Two Australian human rights workers recently expelled from Indonesia
Kevin Rudd was elected, I believe, not only because Australians were fed-up with the Howard government's inaction on environmental issues, but also because a sizable portion were disgusted with the Howard government's attitude towards people seeking asylum and the general erosion of human and civil rights masquerading as taking measure against terrorists. Some enhanced security is no doubt necessary, but not at the cost of deleting rights for all.

Well, initially it seemed Rudd was doing pretty well with the closure of processing centres in Narau and the abolishing of mandatory detention for most asylum seekers, and the abolishing of keeping children and women in detention camps. Christmas Island is still going strong, though, and there has been a stand-off with Tamil asylum seekers who refuse to leave a boat in Indonesian waters. The boat was intercepted at the request of the Australian government.

Our media just beats it up as an invasion of the hordes kind of issue. I have put the article in whole below, because, Ninemsn does not keep it's news up forever. As always, I go to the hard-hitting sites, right? Anyway, the last line from one of the refugee advocates really drives home how we should view the issue of asylum seekers, I think:

"These are human beings you know, they are not live cattle," Ms Curr said.

"The RSPCA would intervene if live cattle were being kept in these conditions."

This legendary generosity Australians are meant to have? As long as it's not in our backyard. But, with a less sensationalistic media slant and with a more human touch, the human would be acknowledged and accepted. Our times are probably softer than they were a thousand years ago. Softer in the sense of fairer, and more aware, more interested in human rights as outlined by the United Nations after the Second World War. I feel, however, that in many ways it is a far more intolerant and selfish world than it was say even twenty years ago. Mass media plays a large role in the fostering of such righteous ignorance I feel. After all, how many Australians actually know anything of the slaughter that just recently occurred in Sri Lanka and from which the Tamils were fleeing?

Two refugee activists deported from Indonesia say the Indonesian government is fed up with Australia's inaction on the asylum seeker standoff at Merak, and will never again intercept a boat at Canberra's request.

Saradha Nathan and Pamela Curr, who touched down in Sydney on Saturday morning, say the Indonesian government deported them as a warning to Prime Minister Kevin Rudd to resolve the ethnic Tamils saga.

More than 240 asylum seekers were intercepted by Indonesia at Australia's request in October 2009, and do not want to come ashore because they fear they will be forced to wait years for resettlement.

They are refusing to disembark and have staged a hunger strike and threatened to torch their boat to draw attention to their plight.

Indonesia has asked for Australia's help to resolve the standoff, but Australia insists it is Indonesia's problem.

Refugee advocates including Ms Nathan and Ms Curr believe Australia should offer the asylum seekers a rapid resettlement deal like the one it used to coax 78 Tamils off the Oceanic Viking last year.

Ms Nathan, a Tamil community activist, and Ms Curr were in Indonesia to meet with officials to organise humanitarian aid for the Tamils.

They say they were intimidated, detained and deported for no reason.

They also claim the Indonesian government made false claims against them, including that they had entered a restricted zone around the boat where NGOs and media are no longer allowed.

"They just wanted (a reason) to say humanitarian workers shouldn't be coming there, that the plight of the Tamils should not be observed."

Ms Nathan said officials from Indonesia's department of foreign affairs told her they did not want to warehouse Australia's refugees and are frustrated that the government hadn't taken responsibility.

"I think Indonesia is trying to give a message to the Australian government by harassing Australian citizens," she said.

"The senior department of foreign affairs official was quoted in the BBC as saying this is the last time we will do this for Australia - they also said exactly the same thing to us in a private meeting on Friday morning," she said.

The official in question was Foreign Ministry spokesman Sujatmiko, who uses only one name.

The women have called on the Australian government to act immediately before the appalling conditions on the boat worsen.

"These are human beings you know, they are not live cattle," Ms Curr said.

"The RSPCA would intervene if live cattle were being kept in these conditions."

Another article on the processing times for asylum seekers on Christmas Island.
Posted by lizardrinking at Saturday, January 30, 2010