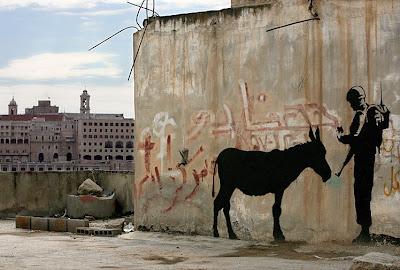 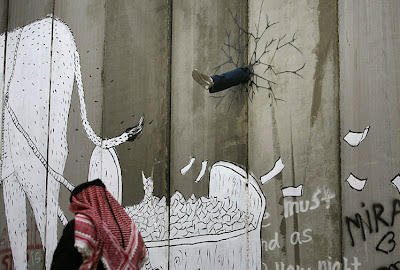 These are two images from Banksy, an artist who is famous for drawing pictures on the illegal apartheid wall that Israel is building to both contain and separate the Palestinian people from their lands and from Israel. He is famous for drawing other artworks, too, as you will see from that link to a gallery of some of his pictures.

This wall been condemned by the United Nations, and to tell you the truth, I cannot understand why there is not more outrage about it. I cannot imagine living behind it. I cannot imagine being cut off from my friends, my family, my farmlands and so on. I can't imagine my daily life spent waiting at checkpoints, under curfew, soldiers raiding my house at will.

The west seemed to condemn the Berlin wall and it also has a lot to say about the division between South and North Korea, but this wall, we fully support it. I mean, it is our money and goodwill that is building it. That is, if our politicians are elected to support us. Why? Well, who knows? The media is not allowed to report on this issue in a truthful or outright manner it seems. This is well documented. Just read the Muzzlewatch blog by the Jewish peace group in the blogroll.

The article that ran these two pictures is an article on the controversy that surrounds Banksy's graffiti art. It is ninemsn, so it is very light. The two captions read:

In 2006 he travelled to Israel to paint a series of murals on the West Bank. That is under the caption of the Israeli soldier and donkey. No mention of the nationality of the soldier there, nor any reason why he might be fully armed against a donkey.

The second caption for the second picture reads: He created this graffiti on a wall separating Bethlehem from Jerusalem. On a wall? As if there are a hundred thousand such walls all over the world, and their existence is perfectly legit, and not to be questioned. As if this wall is not a matter of contention. On the wall, on the apartheid wall. Give me strength.

Possibly, this is the only way that mainstream media can get such strong images through to the general public, but considering how insipid the commentary is, I doubt that people well get how very seriously wrong this situation is. Hopefully it will make some question a little, it will make some query, feel queasy. Journalists need to keep their jobs, but not all of them are ignorant nor without compassion.

How long before those two pictures are removed from the gallery, I wonder? The usual claims made.

Posted by lizardrinking at Wednesday, December 30, 2009

There are so may things that are going on in our world and we are totally in the dark. I am equally raged, they talk about terrorism but do't want to take right measures against it. It's like their sole aim is to aggravate the situation.
Sometimes you can't help but believe in conspiracy theory.
Thanks for binging it out in light.

Thanks, oi. You probably have more sense of it more than most. The Internet is a good source, but you need to know where to look. I just got so angry a couple of years ago with the standpoint of a current prime minister who is slightly better than the last one. I always viewed myself as pretty well informed, but it definitely was not the case.