ain't no Sun-City in Israel - Pixies

Here is a Ha'aretz article detailing Israeli human rights groups asking them not to play. I know that Leonard Cohen should have some idea of what goes on in the Occupied Territories. I am hoping that the Pixies do not know, otherwise it is another favourite band struck from the list. I figure that if Naomi Klein and Noam Chomsky can know, the Pixies and Haruki Murakami can know. If Angelina Jolie and Dustin Hoffman can know, then surely it's not too hard for other people to get a bit of awareness.

I will include the first few paragraphs of the Ha'aretz article: Israeli rights group to The Pixies: Don't perform in Israel

An Israeli human rights group is urging the American alternative rock band the Pixies to cancel their June 9 concert in Israel.

"As much as some of us are huge fans and would love to hear your show, we won't cross the international picket line that is growing in numbers steadily nowadays to come and see you," the group Boycott! wrote Monday.

The organization urges academics and artists to shun Israeli institutions in protest of the government's policies in the West Bank. "The picket line might not always be visible; yet it is there."

Last month, a group of British academics unsuccessfully called on singer Elton John to cancel his scheduled performance in Israel this June.

I feel that if you stand for human rights for your group, whether it be equal recognition for same sex partners, or due to ethnicity, or just because you feel that all humans should receive fair treatment, then there are times when you need to examine your actions and see if they are not upholding the stifling actions of other. I would love to see the Pixies, too. I think I might have to take references to them down from my other blog. *Sigh* Jews sans Frontieres has this article on Elton John. Worth reading. Ooh, and there is now a facebook page urging him to reconsider playing. 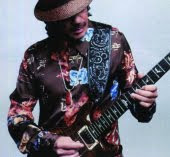 Carlos Santana
However, Carlos Santana made the conscious, conscientious and abiding by his conscience choice to stay away. Cohen and McCartney played. Cohen might need the money, seeing as his manager swindled him out of his life savings, but McCartney? I only hope that ignorance is at the base of their actions.

Artists Against Apartheid and the US Campaign for the Academic and Cultural Boycott of Israel would like to extend our thanks to Carlos Santana for honoring the call for the Cultural Boycott of Israel, by electing not to perform in the apartheid state. The call for cultural boycott was successful in creating international accountability for human rights violations in apartheid South Africa, and is now being applied in the case of Israel...

Cultural figures like Roger Waters, Arundhati Roy, Brian Eno, John Berger, and Ken Loach have expanded their advocacy to publicly hold Israel accountable for its human rights violations and war crimes. We hope that Santana, as an advocate of human rights, will join Archbishop Desmond Tutu and others engaged in the nonviolent struggle for equal rights and justice for the Palestinian people in endorsing the cultural boycott of Israel.

Here is a link to the bds movement, boycott, divestments and sanctions. A peaceful way to help end the apartheid, restrictions and human rights abuses that Israel imposes on the people of Palestine

The open letter to the Pixies which is referenced in the Ha'aretz article is available in full here. Will you cross the picket line?

Here is a contact form for 4AD, the Pixies' record label. Why not write them an email, if you feel bds is a viable campaign to peacefully end injustice.
Posted by lizardrinking at Wednesday, March 17, 2010