those who warrant a newspaper article 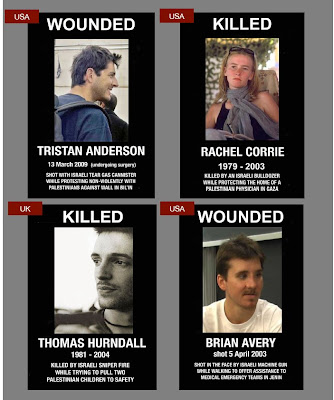 Many things have occurred over the last four days that I have not been blogging. For two of those days I was travelling. One of the biggest stories is the injury of American,Tristan Anderson, by a tear gas canister shot into his forehead by Israeli forces. This occurred at a peaceful demonstration against the continuation of the building of the apartheid wall in the West Bank. Tear gas is regularly fired. People die all the time, but they are not always internationals.

According to the ISM site:

The heavy impact from the tear gas canister being shot directly at him, from about 60 meters, also caused severe damage to his right eye, which he may lose. Tristan underwent brain surgery in which part of his right frontal lobe and shattered bone fragments were removed.
...
Tristan Anderson was shot as Israeli forces attacked a demonstration against
the construction of the annexation wall through the village of Ni’lin’s
land. Another resident from Ni’lin was shot in the leg with live ammunition.

Four Ni’lin residents have been killed during demonstrations against the
confiscation of their land.

There are further updates on the site and links to the sources for the above information. Tristian Anderson is in intensive care, but his condition appears to have stabilised. The ambulance was blocked by the soldiers, and there were also further delays at checkpoints as Palestinian ambulances are not allowed into Israel. 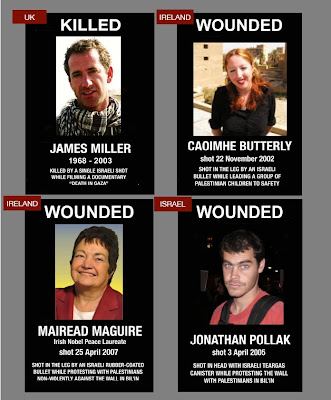 The Australian friends of Palestine and Women for Palestine sent an email today with the photographs (contained in this blog) of the internationals who have either died or been injured whilst protesting against Israeli actions in the occupied territories, or trying to help protect the people in the territories from soldiers and settlers. Two Americans have been killed, and two British. The links to Rachel Corrie, who is probably the most well known, are in the blog roll. None were doing anything violent. Still, they are just a handful compared to the number of Palestinians killed and injured and denied assistance. 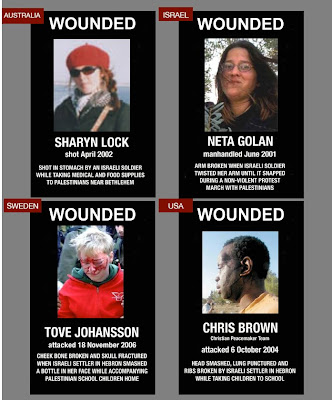 Israel declares itself to be the only democracy in the Middle East. Our newspapers declare the same. To the best of my knowledge, deaths at peaceful protests from authorities in the so-called leading western democracies have not been a regular occurrence since the sixties of last century. As an occupying power, and immediate neighbour, Israel has a duty of care to the people of the lands it occupies. As uncritical supporters, and in the case of the U.S., major aid suppliers, of Israel, we have a duty of care to the people she is so careless with. Think of all the stories behind the statistics which do not even warrant newspaper space. Also, reflect, quite a few of the protesters are Israelis. Why? Could it be that as direct neighbours, and as readers of Ha'aretz and other media, they actually have access to stories and to people and to situations that we do not? That they are actually exposed to the truth in ways that we are not. 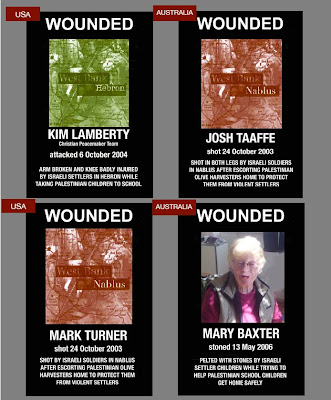 Note, April 3rd: This 2003 article The Brian Avery shooting: When will we realise that there can't be this many "accidents"?, is worth reading.
Posted by lizardrinking at Tuesday, March 17, 2009