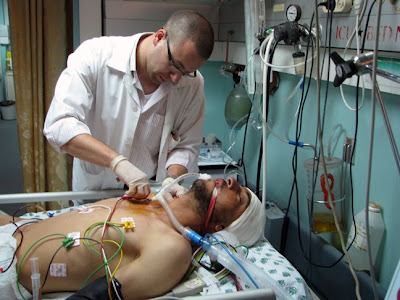 Fisherman shot in the head by Israeli navy while fishing inside the permitted zone.

[ISM] talked to Mr Gora’ani’s brother Nafiz who was anxiously waiting in front of the ICU with a relative and another two fishermen for news about Hazem.

Nafiz was not present when the incident happened and he gave us an account by their brother who was fishing with Hazem and a third fisherman in a small hassaka boat this morning.

They were fishing well inside the Palestinian waters, less than three nautical miles away from the shore with another hassaka, when they were approached by the Israeli speed boat who attempted to kidnap them and take them to Ashkelon.

They panicked and tried to sail towards the coast. In response the Israeli soldiers opened a barrage of fire which critically injured Hazem. A collegue who was present in the hospital told us that there are a number of bullet holes in the hassaka.

A group of Gazan fisherman whom ISM talked with recently told us that Israeli soldiers fire at the fishermen so frequently that incidents are rarely reported if they did not result in serious injury. Only a few weeks ago two hassakas were kidnapped by the Israeli soldiers and destroyed after being taken to Ashkelon, whilst the fishermen were being interrogated and later released.

B'Tselem, the Israeli human rights watchdog group, details restrictions on fishing here. If you Google B'Tselem and fishing there are videos and other information available, also.

Many of us enjoy fishing, have fisher folk as friends, have lost people to the sea. Most of us know that those who like to fish, or who have to fish for a living are usually hardworking, often hard living, individuals, who do not really expect this. Except if you live in Gaza, of course.

Just in case you don't trust a story about kidnapping, B'Tselem, which, I repeat, is an Israeli Human Rights group, has written this at the bottom of their article on fishing rights:

To ensure these rights are not violated, the government of Israel must make public the open-fire regulations relating to the waters off the coast of Gaza, immediately cease the arbitrary detention and abuse of fishermen, and remove the harsh restrictions on fishing. My emphasis.

Any of your family ever have to follow a hobby or make a living under such conditions?
Posted by lizardrinking at Saturday, April 24, 2010