surely god is a book lover, or the security threat that is michael palin 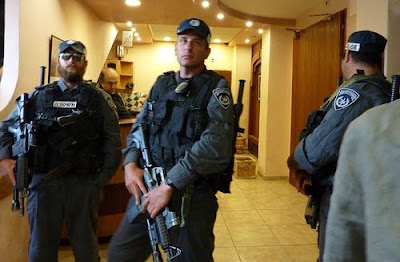 Books or soldiers? The closure of Palfest literary festival 2009 by Israeli soldiers.
Surely God is a Lover is a Paul Kelly song. You can have a listen if you go to his homepage and register for the A-Z songs (free), then go to 'S' and download from there. The 'S' songs will only be up for a month. Thereafter you can download them from Robin Bell Books.

There would be others who would argue that Surely God is a Book Lover. I know there are many out there who love books more than life itself, figuratively speaking, whether they love or believe in God or not. Therefore, the following report even though a little old, should be as distressing to them as it is to me.

I RECENTLY returned from a literary festival that was to have opened and closed in Jerusalem; but which, to our surprise, opened in France and closed in the United Kingdom.

Some 20-odd writers from the world over - including the popular British travel writer and comedian Michael Palin; Sweden’s preeminent thriller writer Henning Mankell; and Canada’s Giller Prize-winning M.G. Vassanji - found our events at Jerusalem’s Palestine National Theater shut down by machine-gun toting Israeli soldiers in flak jackets. On the first evening, with a Gallic flourish, Jean-Paul Ghoneim of the French Consulate opened the French Cultural Center impromptu, and hosted our event on nominally French soil: we paraded through the streets in our party clothes, bearing trays of canapés and looking, I’m sure, very threatening indeed. 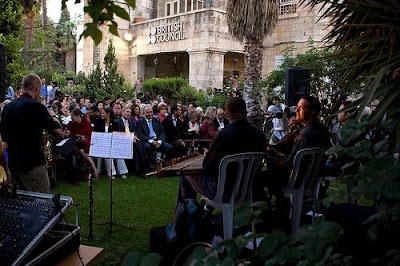 Closing night at the British Council
You might well ask how a bunch of novelists and nonfiction writers could be so dangerous as to require a military-ordained ban in a democratic country. I can’t tell you; except that our literary festival had the word “Palestine’’ in its title, and the use of this word in Jerusalem apparently constitutes a security threat. The city has been declared the Capital of Arab Culture for 2009, and according to Palestinians we met, the Jerusalem police have shut down more cultural events than they have permitted - including the timed release, by schoolchildren, of colored balloons in celebration of Al-Quds. Balloons are also a security risk.

During the week of the Palestine Festival of Literature (Palfest for short), we gave readings in Ramallah and Bethlehem as well as in Jerusalem, and taught workshops at universities in Ramallah, Jenin, and Hebron. 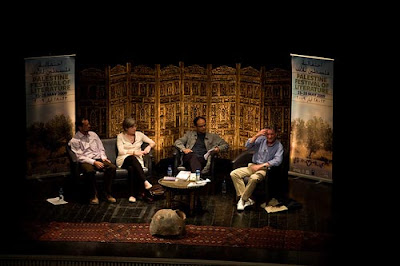 Panel in Bethlehem
We lumbered about in a great tour bus, repeatedly grateful for our foreign passports (nowhere have I been more conscious of the liberating power of my US citizenship); but still, privileged as we were, we waited interminably at borders and checkpoints, in the shadow of the vast, ugly hopelessness that is the Wall, under the panopticon scrutiny of the watchtowers. We answered questions barked by teenagers at the point of their guns. We got a very small taste of what it’s like to be Palestinian. Members of our group likened it to living under apartheid; to Orwell’s “1984’’; to Kafka. But none of these allusions fully conveys the disturbing psychological experiment currently perpetrated on Palestinians in the West Bank. Read more

The closure occurred - according to an Israeli police spokesman and reported by The Guardian’s Micky Rosenfeld - because Israel believed it was organised or funded by the Palestinian Authority (PA), despite being supported by UNESCO and the British Council. Now, if Israel thought it was organised and funded by Hamas, it would have made more sense, but the PA, the governing body of the Palestinian state that US President Obama and other world leaders are so committed to seeing emerge? The PA that has just been offered $10 million in aid by our deputy prime Minister Julia Gillard? So much for that “shining light on the hill” democracy that journalists and politicians are all too eager to laud without questioning how that phrase ever came to be coined.

Similar news here of the prevention of a folklore and creative dance evening from convening in East Jerusalem. 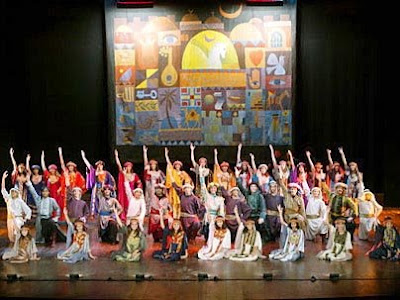 El Funoun dance company
Sonja Karkar also points out that Israel has a cultural partnership with the Melbourne International Film Festival being held from 24 July – 9 August and is asking anyone who wants to help protest such a partnership to please contact AFP. Contact details can be found on their website, here. http://www.australiansforpalestine.com

There are many writers, performers, commenters, activists and so on who protest Israel's actions in the occupied Palestinian territories, despite the blanket support their governments seem to provide for all Israeli actions. Alice Walker, Adrienne Rich, Haruki Murakami and Naomi Klein are among them. There are many Israelis, themselves, who are not happy with the state sponsored terrorism, as it has been so eloquently put, since at least the seventies, regarding the well-detailed Israeli encroachment on Palestinian lands and lives every day, in every way.
Posted by lizardrinking at Friday, July 10, 2009